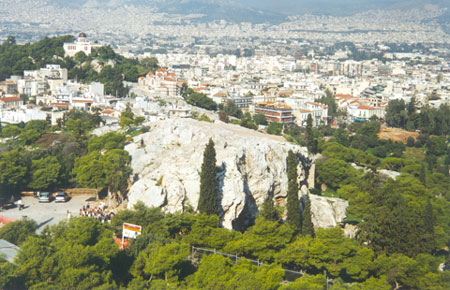 The rock formation above is known as the Areopagus (Mars Hill). In ancient Athens, it was a gathering place for philosophers to debate all the latest ideas.

It was to this gathering of philosphers that Paul was invited in Acts 17:16-33. Some of them had heard him speak in the marketplace, and wanted to bring him so that his ideas could be shared with all of them. When he arrived, they said to him: “May we know what this new teaching is that you are presenting? You are bringing some strange ideas to our ears, and we want to know what they mean.”

The truth of the work of Jesus often seems like a strange idea, whether you hear it for the first time, or you’ve known it for years. But these philosophers understood that Paul’s ideas, no matter how strange, were worth listening to. Some of them, according to Acts 17:33, even become followers of Jesus that day.