I feel bad for even posting this, because it is pretty obvious that Stephen Baldwin is just trying to generate some press to help sell an upcoming book. He is criticizing Bono’s work in Africa: Actor STEPHEN BALDWIN has criticised BONO’s crusade against poverty in Africa, insisting the U2 singer should preach Christianity instead. 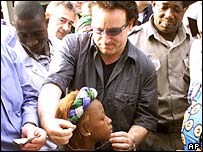 So basically, Steve-o, you want Bono to quit living out the gospel, and to just talk about it? Since Jesus said that he had been “annointed to proclaim good news to the poor” (Luke 4:18), does that mean Bono should fly to Africa, preach to cold, sick, starving young children whose parents have died of AIDS, and baptize them in stagnant, disease-infested water (since helping them get clean drinking water apparently isn’t important) as quickly as possible before they die?

UPDATE: Zach originally sent me this story this afternoon, and I was surprised that he hadn’t posted anything on it. Well, he has now, and he obviously spent more time on his than I did on mine, so be sure to go read what he said.