I may or may not have referred to my iPad Mini as my fourth child yesterday. I love the thing. It’s not often that we are separated by more than a wall or two.

Two recent developments find me using it more and finding it more useful. They have been like nitro injectors for my iPad Mini use. (That’s a car racing analogy. I know nothing about car racing, but I’ve played enough racing games to know that the nitro button gives a nice performance boost. So that’s what I’m saying here.)

My simple and lean iPad Mini setup has gotten so handy that I often leave my laptop at home. And by often, I mean very often. Most of the tasks I really need my laptop for these days are the same kind of tasks I want my big second monitor for too – website making, podcast recording, some heavy duty study for sermon prep, some administrative tasks that benefit from pixels galore.

It’s bliss to get out of the house with a puny setup. Maybe even narcotic. It’s useful for study, meetings, or quick stops. I don’t need a bag. I don’t need a charger. I don’t need physical therapy. Here’s what this setup looks like: 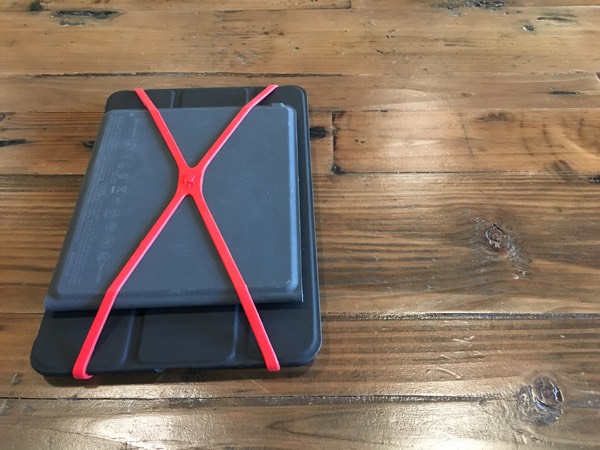 So, back to those two developments…

1) Typing
For much of what I do, the biggest hang up for putting my iPad Mini to work was getting words in there. I can type with my thumbs on it pretty well, but don’t have the emotional dexterity for more than a few sentences. I’ve sometimes carried a keyboard designed for a normal sized iPad, because it was the smallest keyboard I could really type on, even with my pencil fingers. But it was bigger than the Mini and seemed silly to carry. So I didn’t.

In January 2015, I was enamored with the newly introduced WayTools TextBlade. That portability would be a perfect match for my Mini, my self said, so I pre-ordered it with some hard-earned Christmas money. I settled in and imagined my portable life to come. Many delays, months, and excuses later, they still haven’t shipped, and I canceled months ago. But I gained an imagination for a puny, portable working kit.

A few months ago, I picked up the Microsoft Portable Folding Keyboard when it was on a half-price deal at Best Buy. It’s perfect. I’d seen pictures before, but I thought that gap in the middle would be awkward. It’s not. It folds up smaller than the footprint of the iPad Mini, and about the same height.

Some of my favorite work on the iPad Mini is slow, deliberate work. It’s thinking and focusing, but it almost always involves grabbing ideas out of my head and forming them into words. Efficient typing on a good keyboard matters here, and this one feels great. It’s captured thousands and thousands of words already. Love it.

2) Slide Over, Split View and other such wizardry.
The keyboard alone would have been useful, but the newer additions to iOS, and a few apps too, are equal partners. A few minutes ago, I use Slide Over with a browser to look something up while typing this. Great. When responding to emails, I can pull in my calendar to schedule a lunch. Fantastic. When doing sermon prep, I can use Split View to capture notes right alongside Logos. Euphoric.

Also super duper helpful of late is all the behinds the scenes velcroing between apps as words and ideas get moved around. Almost every week, I find a new way to use Drafts and/or Workflow to toss a word or sentence into a file with related ideas that are in development. The links, asides, and quotes I add to this blog can all be sent to the universe from my iPad with only a few taps – far more efficient than the same process would be on my MacBook.

And some finishing touches…
As you can see from the image above, there are a few physical additions that make sure my puny setup is also convenient to carry. The case is a Moko iPad Mini case, which I think I first found via a mention from Katie Floyd on MacPowerUsers. (Thanks Katie!) It’s sturdy, easy to grip, a snug fit, and gosh darn cheap.

The clincher for it all, in this case literally, is a Grifiti Big Ass Cross Style band. These are all purpose silicone bands which hold thingamabobs together. The one pictured here is a six inch band, which still has enough give to pack in a skinny notebook too. And it’s red, because we’re leaning in toward baseball season – go Angels!