I packed an iPad mini for over 4 years, from the week they rolled out until earlier this summer. Now, I’m lugging around the smaller format iPad Pro. (Lugging may not be the most generous term… my feels for this thing fall just a tad short of adoration.) There are trade-offs with the size, but the delights of working with the iPad Pro diminish the heft.

One particular delight, that I didn’t so much expect, has emerged for me – handwriting. I fancy writing by hand a romantic, long lost art. I respect and admire people who do it. I confident they are better people than me and productive members of society. I’ve seen allusions to studies that say handwriting works your brain, and therefore your creativity, from different angles.

I just haven’t had the patience for it.

I’ve been clacking keys since my 9th grade typing class on things called typewriters. It might be the most important skill I learned in that building we used to call a Junior High. And when I want to get words out, I know the keys will get them to the screen.

Typed words can be stored and shared and searched. Digital text moves around easier than ink. I’m keen on finding thoughts I’ve stashed, whether mine or others, for later use, so I’ve long been taking digital notes.

But the shortcoming to the iPad, for me, has always been an ability to capture words when I’m anywhere but at a table or desk. My body’s most natural state is slumped (or reclined if I want to be kind in my self description). It’s not the easiest posture in which to get words into an iPad, so, ideas often seem too much trouble to capture in a moment, let alone paragraphs or sentences. One of my original hopes for the iPad Mini was that it made thumb typing more accessible for my prone moments, er, hours. Even that had just enough tedium to discourage it, though.

But the iPad Pro with an Apple Pencil changes my game. Particularly, some key apps with said hardware are the primary all-stars

First off, I love being able to handwrite words into the normal typing area using MyScript Stylus. Whether reclined or with the iPad sitting on a table beside a book, one hand is all I need to get some words down. It’s not perfect, as the screenshot below shows, but it works well enough to snag the idea. 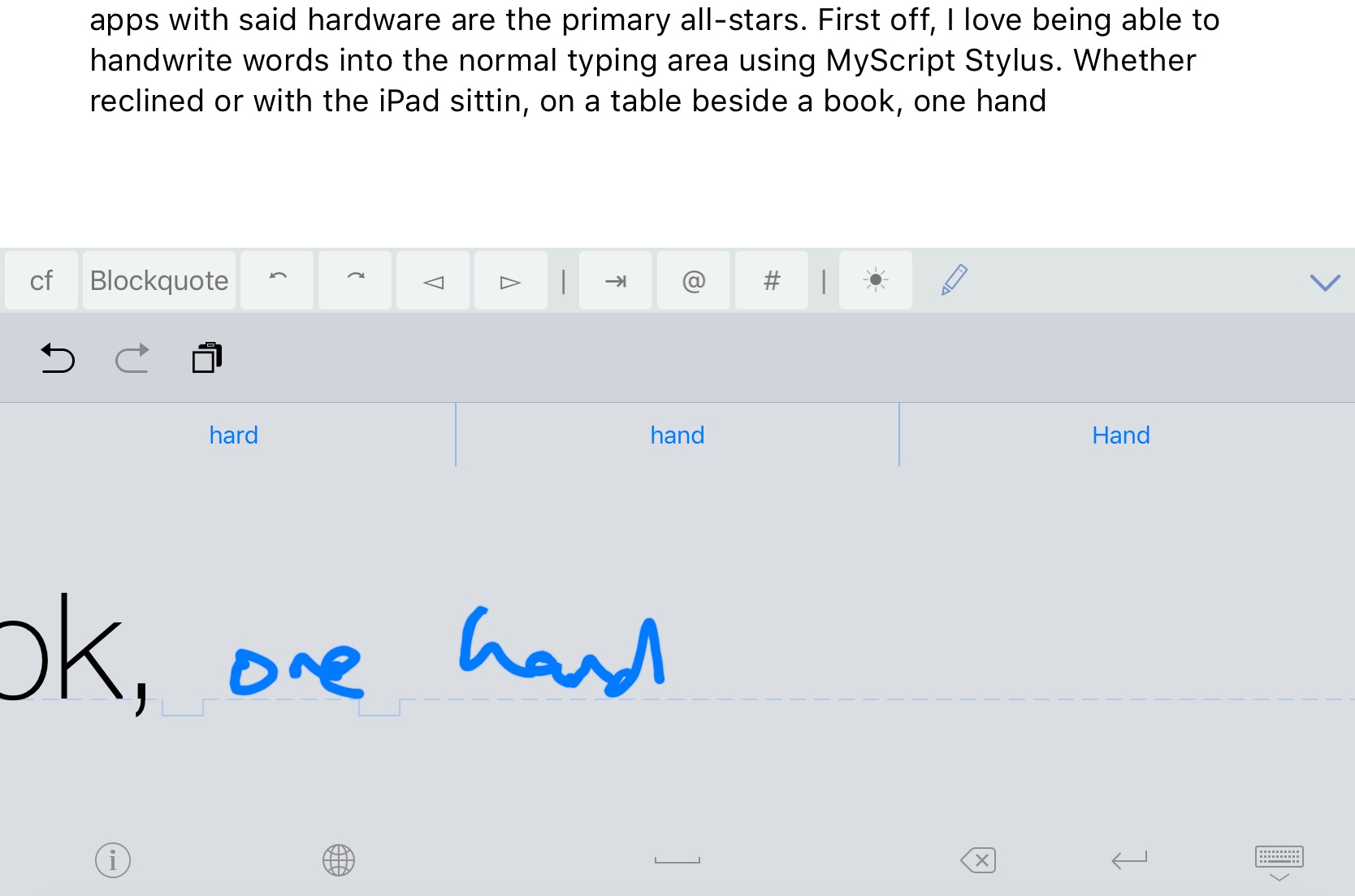 Then, there is the cousin of Stylus – MyScript Nebo. (See screenshot below.) Rather than a keyboard replacement, this app let’s you write on the screen and converts it to text on the fly. The handwritten pages can be saved in a notebook, or you can share the converted text into other apps. 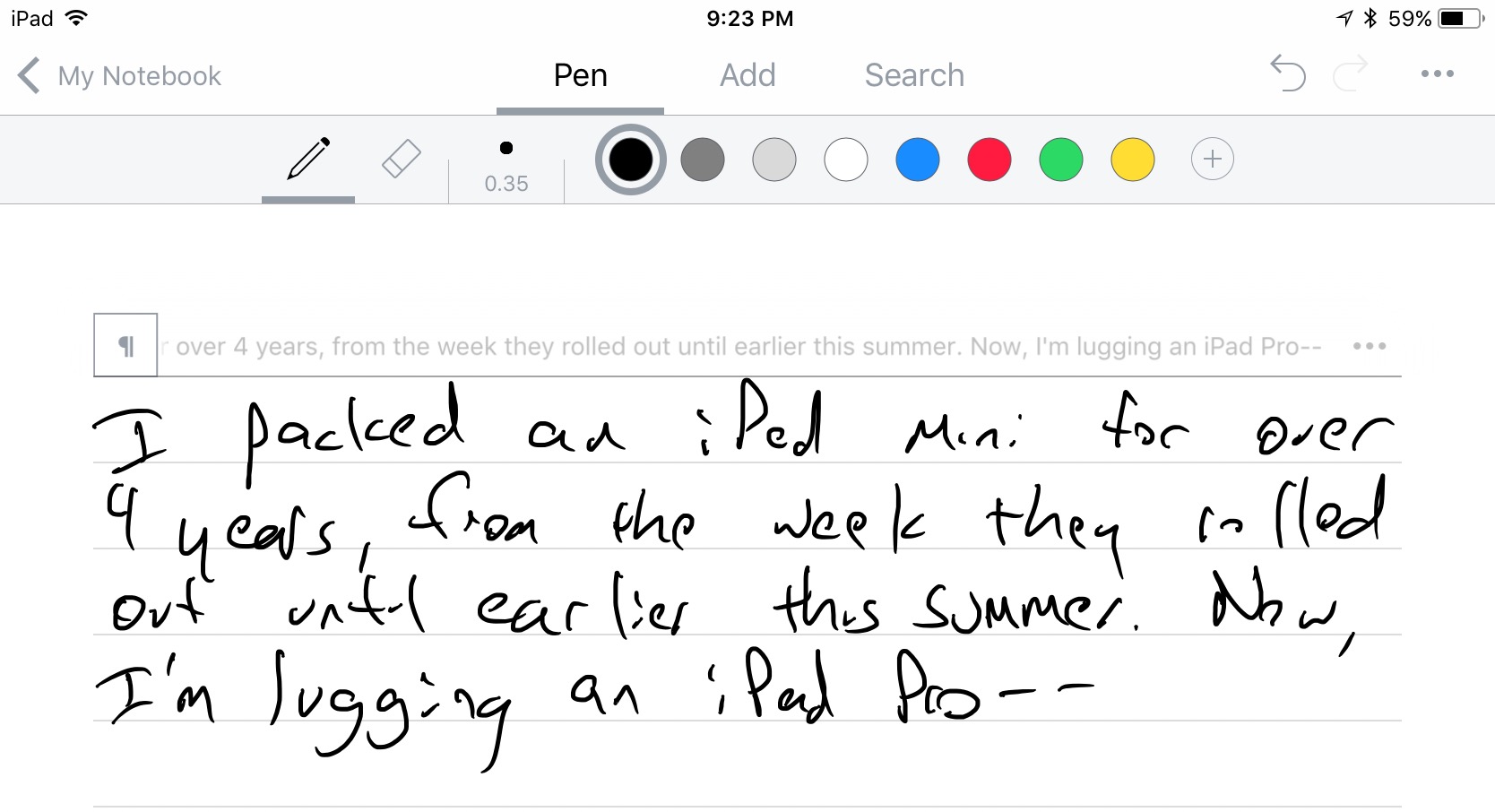 I’ve been doing some journaling this way. I don’t yet know if I’m stretching the creative muscles in my brain, but I can say I’m building back long lost hand muscles and pushing my patience to new places. But, most of all, it’s a viable way to get some words down that is posture agnostic.

The blog reviews I’ve seen about the Apple Pencil either love the thing, or they still aren’t sure how to best use it. I’ve used mine for sketching, fiddling, and highlighting to be sure. But with MyScript’s technology, I’m getting some words down that I might not have otherwise.